London Composers Forum is open to all composers interested in writing contemporary classical music, which covers a wide variety of styles. LCF supports and promotes the work of its members (both amateur and professional), provides opportunities for learning, feedback on works in progress and discussion of ideas, and organises concerts for performance of new works by its members. 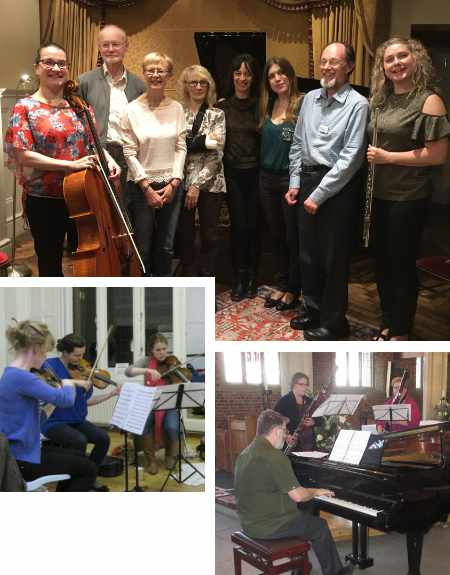 The group also helps stimulate the creation of new works by co-ordinating workshops, tutorials and seminars on a wide range of composition related topics, from composition styles and theory through to the quirks of writing for particular instrumentations.

There are no selection criteria for membership and the member composers range from beginners to professional composers with many years experience.

LCF has its origins in Forum London Composers Group, formed in 1995 by Kerry Andrews, Alan Taylor, Ann Wolff and a number of other composers of contemporary classical music, who had met at that year’s Huddersfield Festival. The intention was to form a group to promote the new music writing of its members. The group was relaunched the following year as an organisation open to any composer based in the London area. In 2010 the name of the Group was changed to London Composers Forum.

In 2016, we were honoured that both Judith Weir CBE, Master of the Queen’s Music, and David Matthews agreed to become our first-ever Honorary Patrons. Some years ago, David Matthews led a workshop for LCF on writing for string quartets, a medium in which he has produced fourteen works to date. His list of compositions embraces orchestral, vocal, choral and chamber music. Of special importance was his and his brother Colin Matthews’ collaboration with Deryck Cooke in the 1960s, editing the first performing version of Mahler’s incomplete Tenth Symphony. David Matthews’ own music is challenging but accessible, and he has reached his own Tenth Symphony. Martin Jones, LCF’s Treasurer, has personal experience of performing David Matthews’ Seventh Symphony with the Ealing Symphony Orchestra. Judith Weir has a well-established international reputation as a composer of innovative but approachable music. Her website includes access to some of her scores.

LCF is unique in having access to an affiliated orchestra, the London Contemporary Chamber Orchestra. Through its playing members, the group is forging links with many performing organisations in London, including London Consort of Winds and a number of chamber groups.

Check our brochure. Find out more about our current and past Concerts and Activities. Our aims and modus operandi are set out formally in our Constitution.