Next session: to be advised

Open House meetings provide an opportunity for “composer talk”: Members can bring along analyses, problems and ideas for discussion, or share a skill. So they are slightly different from our Work in Progress (WiP) sessions as they allow more time for discussion on topics that we otherwise wouldn’t be able to cover – previous ones have seen extended conversations on favourite composers/techniques, writing for film, writing for certain instruments and even notation workshops.

We will usually discuss forthcoming events and projects as well to get you stimulated for the months ahead.

We are getting pretty good with Zoom nowadays:

We aim to hold an Open House session every third month on a Monday evening. During the last few months these have been held online via Zoom. However, we resumed our in-person meeting on 15 November 2021 at the New Cut Common Room, 106, The Cut, London SE1 8LN, and as an experiment also opened it to remote participants through Zoom.

This hybrid way of working was successful enough to consider for future meetings. The session on Monday 16 May was held via Zoom.

If you would like to offer a talk, a presentation, or a topic for discussion for one of these sessions, please email chair@londoncomposersforum.org.uk.

Prospective members are welcome to access Open House meetings (please contact us in advance to learn how) and, we hope, join the group soon afterwards.

In past years we have arranged a set of composition tutorials, which led to writing and performing new pieces. These were open to non-Members. Please email suggestions for tutorial topics to chair@londoncomposersforum.org.uk.

This year we arranged a tutorial session with the Aurora Trio, Emma Halnan (Flute), Jordan Sian (Viola) and Heather Wrighton (Harp). They played an example of this combination of instruments and then gave excellent advice on writing for each instrument, including especially what pitfalls to avoid!

Subsequently Members offered 11 pieces, which were workshopped in March 2022, leading to a wonderful concert in May 2022.

Here is a list of links to websites that offer a range of resources on composition, form, harmony, counterpoint and orchestration. They cover a wide span of skills and are especially helpful for those with limited formal training in composing and arranging. The list also includes specialist guidance on writing for different instruments, for sections of the orchestra and various ensembles.

London Composers Forum runs informal sessions (“WiP” for short) where participants can present a finished or unfinished piece or an idea for a piece, and get some feedback from other participants. We hold about seven sessions each year.

Considering a Member’s developing work during a Zoom session

These have proved ever more popular and useful, particularly for new Members. Attendance is a privilege of Membership: however, non-members who are considering joining London Composers Forum may attend once, free of charge, for a taster session. For the time being, given the COVID-19 situation, we are providing this service remotely through Zoom software.

We have had nearly double the number of participants typically attending our London meetings. We can see each other, talk to each other, play sound files and share scores. The discussions are much appreciated by the members who present their unfinished work. It is an enjoyable evening even for members who just join for the discussion. 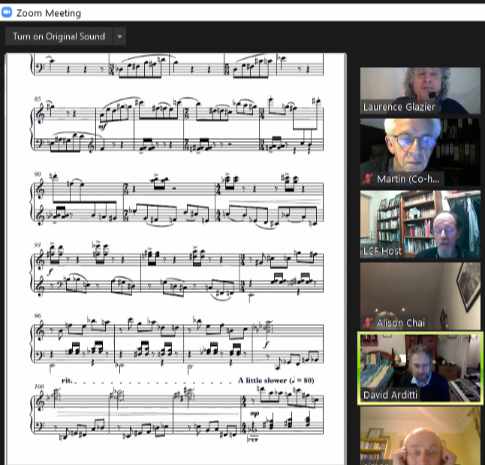 At the one in June, we considered an orchestral work, a horn concerto, an electronic composition, a work for a small chamber ensemble and a number of piano pieces.

We have developed a routine, whereby we aim to hold sessions lasting about two hours on the third Monday evening of a month, two months out of three. The next will be on Monday 18 July at 7pm. The Secretary will issue joining instructions by email.

It is quite easy to install Zoom from zoom.us. It works on a wide variety of computers and mobile devices, and is free to you. LCF has taken out out a subscription to allow any of the committee to initiate a meeting without time limit. The invitation will give you a link to connect you to the meeting and explain what you have to do to join in and present your work. You will need a webcam and microphone either in your mobile device or attached to your desktop computer.

Because of the pandemic, the 2020 project concert was delayed until July 2021, so we did not run a project for 2021. The project for 2022 is based on the themes of Protest or Celebration.

The project for 2020 sought inspiration from the music of György Ligeti: specifically his orchestral piece Lontano. This piece is built essentially from a single concept, in this case long notes, and evolves slowly as if it were a drama in real time. So we received pieces of a similar dramatic nature, based on rather few ideas, that have taken their composers away from their normal compositional domain.

The project for 2019 related to Continents. The world was divided up amongst members, who were free to encapsulate or react to a particular continent: the geography, the people, the culture, etc.

The 2018 project was to write night music. Six LCF members responded to one stanza each of William Blake’s poem Night.

For 2017 we ventured into film music. Six LCF members wrote short segments to accompany a 40-minute silent film. The pieces were played live by the LCCO with narration of the film.

The project for 2015 was to write concertante pieces of up to 5 minutes. Composers chose one of the following as concertante instrument: violin, clarinet, wind quartet (flute, oboe, clarinet, bassoon), trumpet, trombone, two percussion.

For 2014, we celebrated the tercentenary of the birth of the classical composer Gluck. Composers responded to the Dance of the Blessed Spirits from Gluck’s opera Orfeo ed Eurydice, which remains his most popular opera. From its second Act, set in Elysium, comes his most popular instrumental piece, the ballet Dance of the Blessed Spirits for flute and strings. The piece was elaborated some years after the opera’s première and displays many compositional features that chamber orchestra composers would do well to observe, learn from and respond to. The LCCO concert With a Little Bit of Gluck on 4 October 2014 included pieces written by seven LCF composers for this project. Go to Concerts and click on “With a Little Bit of Gluck”.

The project for 2013 was to write for solo voice (mezzo-soprano or baritone) and chamber orchestra. Five such pieces were premièred on 5 October 2013.

The 2012 project was the opportunity for five LCF composers to write pieces of up to 10 minutes in length, which were workshopped and then performed during the 6 October concert.

The 2011 project was to write a modern Concerto Grosso.

The LCF collaboration with the London Consorts of Winds reached its culmination in a performance Dance with the Winds on 19 March 2017 at the Chisenhale Dance Space near Mile End. The Consorts are a group of about thirty amateur brass and woodwind players based in South London playing in three separate ensembles – the Ancient and Modern, Classical and Clarinet Consorts.

The project presented an opportunity for seven composers to write pieces for dance of up to 10 minutes, two for each Consort. Four LCF members – Janet Oates, John Holland, Alan Taylor and Zillah Myers – took part, along with three other composers. 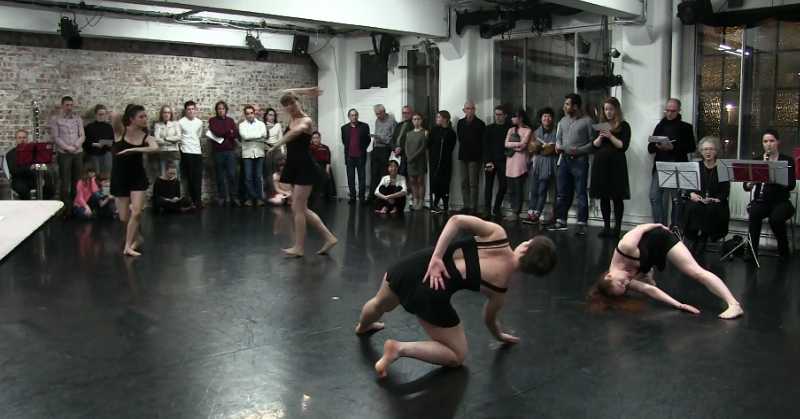 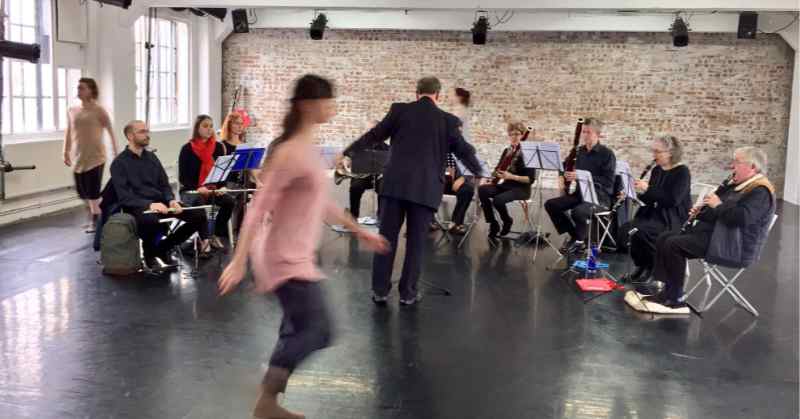 Each composer was paired with one dance student acting as choreographer. They worked together and with their chosen ensemble during the autumn of 2016 to generate and finalise a new work. The works were developed and rehearsed during the early months of 2017.

Unfortunately Alan Taylor’s piece could not be performed on that first occasion due to unforeseen circumstances. It is hoped that a further performance of the whole set, including Alan’s, can be arranged for the autumn of 2017. 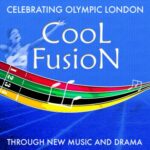 Cool Fusion was a major voluntary arts initiative during the London 2012 Cultural Olympiad. Celebrating the Olympics and Paralympics within London’s vibrant culture, it presented four performances of new music and fresh drama in historic venues across London.

This unique multi-media event was performed at:
All Saints, West Dulwich (21 July) – this Grade I listed building, ravaged by a tragic fire in 2000 but now beautifully and imaginatively restored, is the venue for the twice-yearly musical feasts presented by the Lambeth Wind Orchestra. The local community partner was Kids’ Company Lambeth.

Cecil Sharp House, Camden (28 July) – voted one of London’s top five music venues by Time Out, this Grade II listed building is the home of English folk music, mixing the scholarly and the bucolic. The local community partner was Kids’ Company Camden.

St. Mary’s, Putney (4 August) – the site of the radical Putney Debates during the English Civil War, St. Mary’s is accustomed to the epic (the annual grand Gala Ball) and the intimate such as London Composers Forum chamber recitals. We worked locally with Regenerate-RISE and Paddock School.

Cool Fusion is proud to acknowledge the support given by public funding from the National Lottery through Arts Council England, with further support from Wandsworth Borough Council, Westminster City Council, Vital Regeneration and BNP Paribas.